21
єиgя. ѕαмєѕτ
First AMA On Uptrennd Africa Telegram With 2,000 1Up Attached On Tuesday 25th February 2020, Uptrennd Africa pleased to announced the first AMA on her telegram with Telokanda.Telokanda is an Africa project built on Telos  with three Co-founder set to introduce their product and t

21
єиgя. ѕαмєѕτ
Uptrennd Notable Day, Newbie You Need To Know This! I want to welcome every newbie to this great platform. As today is a remarkable day in the history of Uptrennd Platform due to two important events ongoing which are: 2UP on every of your engagement on the platform and Final Vote

21
єиgя. ѕαмєѕτ
Uptrennd Africa Second Banano Giveaway Are You Aware Of Banano Project?Do You Miss Out Of Uptrennd Africa First 10,000 BAN Partnership Giveaway With Banano Last Week?Another Opportunity Is Here!Banano is a project that built on DAG Technology keen to NANO Blockchain. The project f

21
єиgя. ѕαмєѕτ
An Infographic Design Of Powerful 7 Uptrennd Community Guidelines Hello! Uptrenndians, Before the release of @jeff announcement on the community guidelines 17 hours ago,  I was seriously having headache sighting many new accounts invading this platform and spamming, &nbs

21
єиgя. ѕαмєѕτ
Huobi Training Opens New Character In Crypto Space In crypto space, learning as ever been what we can't overlook or overemphasized. Today my connection on LinkedIn reached 5900 with great influencer individuals to crown the number. Emeka Ezike is the community manager for Huobi 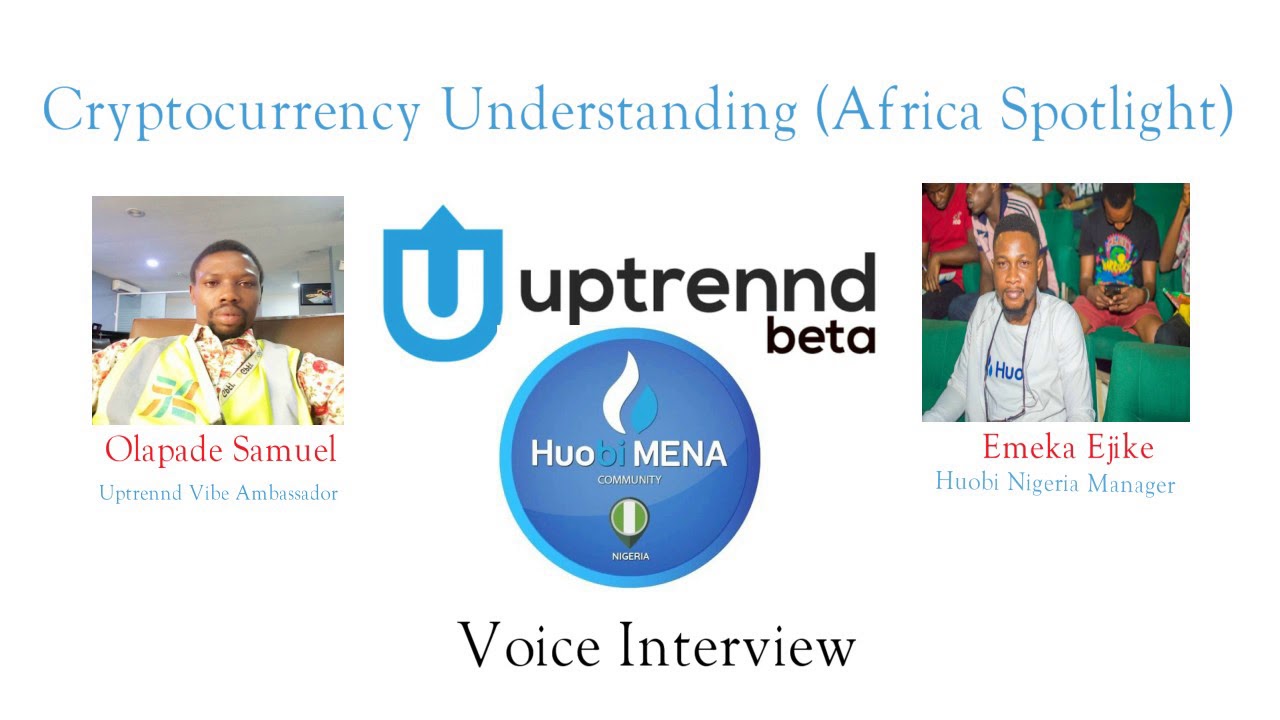 21
єиgя. ѕαмєѕτ
Uptrennd Africa Interviewed Huobi Nigeria Community Manager (Get Understanding In Crypto World) Hello Uptrenndians,As the world of digital asset increase, Africa in not exempted and Uptrennd platform recent achievement of 50,000 members spread across the globe and Africa is not ex

21
єиgя. ѕαмєѕτ
Uptrennd Alert: Creating A Prosperous Brand The growth of a project is a determinant of the users and the team that manage the project. Building a brand can begins on a very little action you take, but do you really follow and checkmate your action as you journey in your engagemen

21
єиgя. ѕαмєѕτ
Can Bitcoin Risk be Managed? Hello!  Friends, Its actually long ago here we study some information that can help in terms of crypto investment on blog. Recently I was considering the rise and dip as it applied to bitcoin the first digit asset in crypto space and I feel

Suterusu -- The Flexible Privacy Solution to Rule Them All

Suterusu (SUTER) just officially listed on the KuCoin platform. This is the third official exchange listing for SUTER after MXC and Lbank. Suterusu brings ZCash level privacy to any blockchain or application. Check out why this project is so exciting and expected to be a huge game-changer.What is Suterusu?One of the most polarizing debates shaping up for bitcoin’s community will hinge on the extent of privacy that the network should enjoy. The dichotomy of the ideological camps is driven by a desire to cater to KYC standards and government regulators to “legitimize” bitcoin or retain an anonymous privacy-first mentality derived from cypherpunk ethos. But the debate about privacy has some other collateral effects not strictly relegated to bitcoin. For example, cumbersome initiatives to induce privacy features on ethereum are complex, time-consuming, and expensive. Much of the research in ethereum privacy could (and should) also be directed towards more pressing issues like scaling. Networks like Monero and ZCash that bootstrapped advanced privacy out of the gate fair better because they have committed to full privacy. However, they are facing scaling and interoperability problems of their own, and are limited in their audiences. Networks like ethereum and bitcoin already have enormous network effects. Ideally, the solution to onboarding more users should be to focus on pressing problems and let external solutions develop more ancillary services. And that’s precisely where interoperability and flexible (plug-in) tools for privacy become valuable. Enter Suterusu. Appending Advanced Privacy to Layer One Chains We’re no longer solely in the layer two scaling or layer one privacy phase. Projects like Suterusu have launched another state in the development of blockchains. Efficient, standardized, and flexible tools can now be applied to layer one networks independent of their own development stack. Suterusu wields ZK-ConSNARKs, a compact, constant-sized ZK-SNARK (zero-knowledge proof). These innovative proofs have the privacy assurances of ZCash shielded transactions but don’t require a trusted setup or as large of transaction sizes. But that’s only a part of Suterusu’s advantage. The idea is an open framework for launching privacy blockchains or applying Suterusu’s ZK-ConSNARKs to layer one protocols. For example, Suterusu could provide ZCash-level anonymity to transactions on ethereum or bitcoin -- without affecting their network development stack directly. Instead, Suterusu uses a cross-blockchain protocols that enable the anonymous transfer of assets in and out of layer one networks like ethereum. Rather than layering privacy features on top of ethereum’s development stack, increasing complexity and transaction/contract sizes, it functions as an outlet for private assets.The impact on DeFi for networks like ethereum is manifold. Suterusu has modules for enabling DeFi developers to build payment models and other apps with private assets without having to understand the underlying complexity of zero-knowledge proofs (ZKPs). Ostensibly, this means that Suterusu is like the tree trunk of financial privacy to which other networks can plug into (branches) when in a need to issue, transfer, or develop private financial assets. Broadening The Scope of DeFi  There’s a reason that dark pools and OTC desks exist besides the benevolent (and contrived) reason of not trying to negatively impact the market. Institutions and other financial entities simply want privacy with some of their transactions -- just like everyone else. But imbuing privacy features into ethereum after its rapidly ballooning blockchain misses the point. Integrating zk-SNARKs into smart contracts and transactions on ethereum will only lead to a cycle of more complex and specious technologies, which incidentally, is currently in the zk-rollup phase. At this point, DeFi users, developers, and entrepreneurs are better served looking outside ethereum for appending privacy to their platforms and associated assets. Suterusu serves this role ideally. The network provides an anonymity-focused complement to ethereum’s surging DeFi community with a much more efficient and flexible approach. If users want to initiate dark pools or private asset swaps, they can simply plug into Suterusu from a DeFi interface on ethereum. Rapid UX improvements are already helping to mask the underlying complexity of lending protocols like Compound and MakerDAO. Privacy should be next on the bucket list. For bitcoin advocates, the privacy battle may ultimately come down to how much adoption privacy-focused coins like Monero and ZCash achieve or if it can maintain its current balancing act of privacy. Suterusu, again, can provide an outlet for achieving privacy on bitcoin without directly impacting its protocol. Similar to Liquid’s CT transactions but built with a hybrid PoW/PoS validation method instead of a federated sidechain (more centralized), Suterusu can open many doors for bitcoin. DeFi applications using bitcoin can become more extensible, and even operate anonymous swaps with other networks like ethereum. That’s highly appealing to anyone looking to increase liquidity and privacy for both chains. In the end, bitcoin’s looming privacy debate and ethereum’s scaling efforts are polarizing affairs. Suterusu is a release valve that provides compact privacy without all the noise and complexity. For the sake of focusing on more pressing needs, such as ethereum 2.0 for the ETH community, these groups should pay more attention to flexible external solutions like Suterusu. ** I am part of the suterusu team and this is OC

A Little About My Journey..

A Little About My Journey..

Make the Most of 2UP Tuesday!

Make the Most of 2UP Tuesday!

Upvote on a Comment = x2Upvote on an OC Post = x2Upvote on a non-OC Post = x2Downvote on a Post = x2Downvote on a Comment = x2LET'S MAKE THIS DAY CRAZY! THERE IS NO STOPPING US TODAY!GET YOUR COMMENTS OUT! GET YOUR POSTS UP! EARN TWICE THE AMOUNT FOR DOING THE SAME EFFORT!NEVER STOP UPTRENNDING TODAY MUAHAHAHA.BUT REMEMBER, SHITTY POSTS AND COMMENTS WILL LOSE TWICE AS MUCH... DON'T LET THIS HAPPEN TO YOU!SEE A SHITTY POST OR COMMENT? DO YOUR PART! DOWNVOTE IT!WHAT ARE YOU WAITING FOR... WE ARE ALREADY 7 HOURS IN... GO GO GO GO GO!!! DON'T BE LEFT BEHIND TODAY!

I often hear friends, acquitances, enemies say they want to seek a greener pasture outside their present location. Those in Nigeria, have found Canada as a place of fulfilment.I, for instance have prayed and wished that I leave the shores of this annoying country to somewhere else just for greener pasture (costs quite a fortune) considering the situation we have found ourselves in.In recent times, the story has changed. Yes, I am still in Nigeria but I have carved a greener pasture for myself.That greener pasture is Uptrennd!It may sound awkward but what I have earned from Uptrennd in the past 6 months, my circular job hasn't achieved that in 2 years.Uptrennd has given me a better standard of living (financially)I have met people from all over the world and it seems more to me like a family My level of exposure and thinking has changed (my thoughts are no longer local or limited) I reach a broader view.My earning from Uptrennd has helped me achieve my dream of the kind of life I want to live.Its amazing to know that the green pasture I have always craved for is right here with me.The only problem I would have to deal with is the harsh weather condition over here. But of course, u can't do anything about it. Its a natural cause.Have you found a green pasture in UPTRENND?