What is TrustSwap (SWAP)? DeFi

Check out my original post on Quora at: https://qr.ae/pNsGzs

What is TrustSwap (SWAP)?

Recently, I wrote about ‘What is DeFi’ and I wrote a review on ‘Kyber Network’. Today it’s TrustSwap’s turn to be covered by me here on Quora. I decided to write about them today as I discovered them two days ago and after doing some initial research I decided to buy a bunch of SWAP. So today we’re diving in to learn more about TrustSwap, their roadmap and if I’m keeping this as a short-term trade or a long-term hold. Important to mention is that their platform is not live, and so all information shared here comes directly from their website.

TrustSwap is a new platform designed to enable people to exchange money securely and reliably. The platform offers escrow services, time-released transactions, smart swaps, transactions of tokens & tokenised assets and more. Various features made me think of Uniswap but it seems like it goes much broader than that. The use cases they display on their website show perfect examples of what I mean by that: 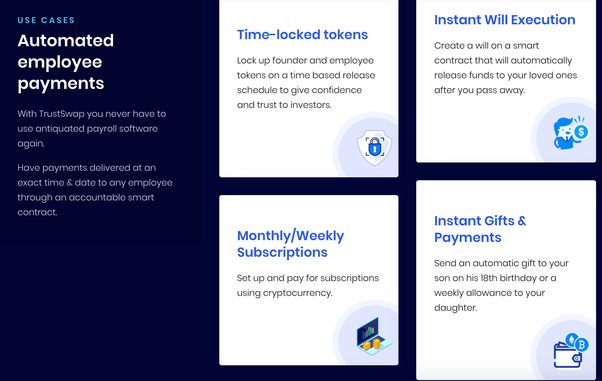 To maybe push this a little further, here is how I could envision this being used:

The time-released payments can be used by for example OTC deals or project crowdsales/token sales, be it during the private sale or public sale.

Participants would not rely on the team to send the tokens, they would automatically receive them upon sending their funds to buy the tokens. Now say there are lock-up periods for not just team tokens, but also for seed investors or private sale investors. These terms could easily be put in a smart contract as part of the deal, meaning the participants would receive their tokens immediately but can only transfer certain amounts after tokens unlock at certain set times.

This is incredibly interesting for all kinds of OTC deals, with much cheaper fees than lawyers would typically charge and much less paperwork.

Now universal token wrapping is worth writing a separate paragraph about in my opinion. Having worked with multiple blockchain projects in the past few years, I can verify that launching a token other than an ERC-20 token is much more costly. It’s more difficult for exchanges to integrate/list them and it’s more difficult to use them on other decentralized platforms.

We’ve seen token wrapping around, however never easily at scale. TrustSwap will offer a universal token swapping feature in which projects can integrate any token on any blockchain with the TrustSwap ecosystem by simply wrapping any token at a 1:1 token to an ERC-20 token.

Once wrapped, this token can be used throughout the entire Ethereum ecosystem, including DApps, (decentralized) exchanges, and more. Wrapping works and it’s efficient, wrapped tokens can easily be swapped back to native tokens to use them within their network again.

Now, one of the main reasons I almost immediately purchased SWAP was because of their founder. Jeff Kirdeikis. For the people that don’t know him, Jeff has founded Uptrennd (the most active / engaged blockchain social media platform). He’s a host of the Bitcoin and Crypto podcast, and he runs the biggest Facebook group in crypto called ‘Cryptocurrency Investing’ - counting over 150k members.

I’ve been a member of this Facebook group for almost two years now, and I’ve seen it grow. It’s very engaged and the fact that Jeff is a founder of or / and plays an important role in these projects makes for TrustSwap to be able to tap in an enormous audience for free. Allowing them to jumpstart the project, get massive exposure and spend the funds they saved on this on other marketing activities.

Adam Barlam has been hired as their CTO. Adam is the dev and founder of Bravocoin (a decentralized social network). Joaquim Miro is the CGO who works with GDA.Capital, a capital firm that connects institutional money to crypto.

Now I wrote certain things made me think about Uniswap. Uniswap has been incredibly popular the past few months, but unfortunate they have no token that allows for speculation and profit-sharing. Finding out TrustSwap has a token made me excited, especially after reading the tokenomics.

SWAP will be used throughout the ecosystem and offers various features:


Only 100,000,000 SWAP will ever be in circulation. 60M has been sold during the initial liquidity offering, 20% is used for marketing, development, legal, etc. activities and 20% has been allocated to the team members.

Now I would love to write a platform review, but the platform isn’t live yet. So, I’ll surely do so once it’s up and running. Their roadmap is clearly described on their website. August will be full of new releases that I’ll sum up here:


My thoughts on TrustSwap

I’m pretty sure I’ve shared my enthusiasm throughout this post. SWAP is the first token in almost two years that I’ve almost blindly purchased after doing some quick research.

I purchased SWAP at a price of $0.055 yesterday and woke up to the price being $0.076 ( 40%) today. This is an incredible price increase that I hoped for, but didn’t anticipate would happen so soon. Unfortunately I haven’t purchased the amount of SWAP that I would like to hold. However, at the current price (even though I believe long-term it’s still peanuts) I’m holding off of buying any more for now. Some people are up over 14x on SWAP now and I’m anticipating various whales have been taking or will take some profit soon.

I’m hoping the price can go back towards $0.006 one more time at which I’m looking to purchase the rest of my long-term bag that I’ll be using for staking. I’m looking forward to all their releases in August and I'm hoping to be able to share some insights on the actual platform right after its launch.

For those of you who are interested in purchasing SWAP, I would recommend using Uniswap as it offers the most volume and liquidity (top-10 in volume in the past 7 days).

If you enjoyed this post, then please consider following me on Quora and here.

This post is for informative purposes only, I’m not a financial advisor and I currently have a position in SWAP. I am not planning to change this position within the next 48 hours unless the price drops and I can purchase more at the price I mentioned in this post. I have not been paid for this post, this post is out of personal interest.

I certainly enjoyed this detailed review. With a leader as Jeff, Trust Swap is bound to be successful and top the the Defi world in years to come.
The success stories (Pricing) since its launch is overwhelming. Its certainly a worthy investment.
Dont forget to alert us when it gets to $0.06. Lol

Great write up about Trustswap, i want to go and buy more now after reading it

Hopefully we'll get another chance to enter at $0.06!

Great write-up! Helped me to decide to invest in Trustswap a few days ago, just in time for this massive pump. Ontzettend bedankt, Marco ;)

I purchased some SWAP token some days back and I can measure my profit now. Great token to invest in!

Excellent review from you buddy!

This project has received lot of interest, because of which they got free exchange listing too, youtube coverage....

A cryptocurrency is a digital asset designed to work as a medium of exchange that uses strong cryptography to secure financial transactions, control the creation of additional units, and verify the transfer of assets.