A race going on all around uptrennd having both the coach and the racer. Coming together to get better as they get more and more involved in uptrennd. And it sure has been fun up till this moment. If you still don't know about it, check it out on @Tiger Lily's profile.

I happen to have known the coach from the start, always good when it comes to giving quality and knowing well to reply comments which led to me knowing it would be good to pick a coach like that.

I got a notification, and saw a name of a post called "I Have a Confession". And right away I ran towards it,🏃 no one likes to hear gists more than I do, cause even I like to share them. And so I got there, and started reading.

It's the most recent and best post the coach has made so far for me, and I read, it was talking about something catching the attention and making all around move further apart. Feeling satisfied by the one thing and having not to think of anything once it's present.

And then, boom! I saw what it was she was explaining. "It was a phone!" Her phone to be precise saying of how precious the phone. is. Most of these reasons are why I knew I had to pick the coach cause it was always interactive and there's always something to pick when it comes to reading from the post.

It took time and energy, from one name to other. Suggesting words the meaning weren't even known. It started from "Smoulder" then to others that were even funny than the rest were.

But after time and suggestions, it finally rang, and it got both I and the coach happy, TEAM ACHIEVERS. And then the bigger problem came which was the badge best fit for the team. Another stress but it came out good and we formed more than one of it.

We boil with flames n steam

And always stay ahead

And we stand together as one.

Still think you're not reading from the best team? Think again! 😏. Cause with the Achievers Team you're up for a really tough Challenge.

Oh, and I didn't mention who my coach is from what I see. It's none other than Chammy Jay herself. 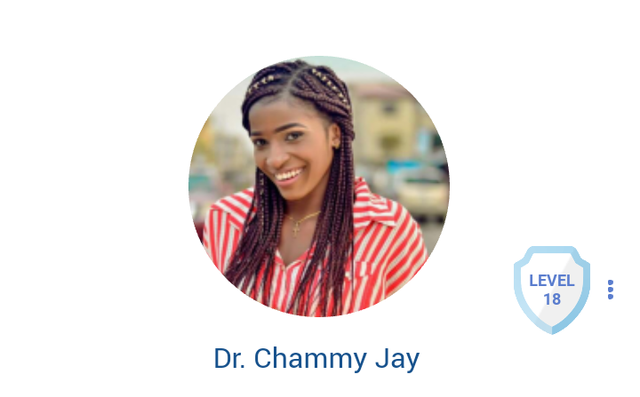 The best coach for a competition like this. Always making sure the race goes the right way and it keeps itself in a good atmosphere.

This is awesome,  and with Chammy by your side nothing ever goes wrong...

I wish you both all the best in this race dear

Hehe. The name has been right from the start and I didn't even know it was until I thought of it well.

Did you know it's even in my description 😂. I didn't until the name was agreed and then I realised it was.

Go...let no one take your A position. I'm so happy you have been selected. I wish you all the best.

Yes o. That's what makes it an "A". Meaning the first and it's not possible for a letter to be ahead of the first letter. So we go into the race with that mentality and make sure to keep it that way.

You could participate too you know. It's not too late. Just check what Tiger Lily posted and you'd get updated about it

O waoooo.....I am glad to see you are going to take part in Uptrennd University competition and would join soon UU.

Your coach is also very much talented.Wish you both best of luck.I like the idea of you both as a team.

She sure is a talented person. Someone that knows how to make you speak your mind and find how to make that better. Makes you improve on what you already have and bring the best out of you. Isn't that someone to take as the best coach? Hehe.

Strong energy and vibe I see you have brought to this Marathon..

Well I wish you all the best and your badge concept is excellent..

And also a great coach to be running this team and I wish you all well dear in the contest..

Yes o 🥳. That's what the Achievers do! We bring the life into what wasn't shinning beforehand. And we make sure everyone feels that too.

Thanks for the wishes in this man and I'm wishing you well too. And the coach sure is the best amongst all as you can see...

Rocking badge of team A . As the badge looks rocking , let rock your team  and be at the top.

We rock!!! 😂. That's the motto and we stand by it too. It sure is good to see you like it meaning we came up with the best badge for the team too.

Oh well, that's about me, shouldn't you be participating in this too. It's one not to miss you know... Everyone is having fun with it and you shouldn't miss out with that yourself.